THOUGHTS & IMAGES
from harmonizing
the opposites to intuition
1964 - 2020 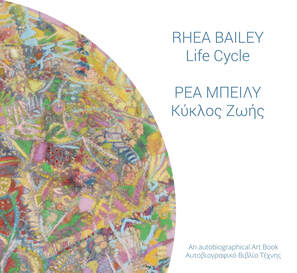 The introduction of the book as written by Rhea Bailey herself, in the same beautiful way she speaks.

This book sums up 56 years of personal evolvement through artistic creation, from 1964 to 2020.  It contains a few works from each decade. In case of early paintings that had been sold to all continents Ι had to use old slides and negatives. Earlier work (portraits of my parents and friends, especially my mother who used to sit for me patiently, landscapes, life drawings, sketchbooks of people Ι used to draw on the train in London) were sadly lost when moving back to Cyprus. Only a few black/white photos (no. 1-2) from my year at the Sir John Cass School of Art survived. Along with the images, I present the personal philosophy that evolved with the work by including lectures I gave at different times -with the past 'Philosophical notes' being a summarization of the others- and some condensed messages I used for exhibitions (press and invitations). You can find my analytical CV at the end, some 'artist work pictures', as well as a few of many articles of my art.

Born to Haritini Kalispera and Vassos Athanassiades on 26 August 1946, I lived the first 6 years of my life in my mother's ancestral home in Nicosia within the Venetian walls. First impressions of light and shade, sound, scent and texture were memories to be used years later with our secluded garden as background to symbols and feelings as in 'Diptych of Life with Watermelon' (no.9). I was given the name of the Greek Earth Goddess and a Greek education. My father was an accountant and my mother a well read, artistic lady. In 1952 we had a house built outside Nicosia in a quiet suburb on the banks of river Pedieos. With my parents, I had a balanced life of work and entertainment, culture, excursions to archeological sites and nature. At the age of 5, I started taking piano lessons, as I had a strong attraction to the instrument and finished 10 years later when I decided to focus on painting.

In our lives we had painters like Telemachos Kanthos, Stelios Votsis and Lefteris Economou who would not let a go talent go to waste and who advised my parents to help me study Fine Arts. My wish to go abroad on my own was rejected by my parents. In 1964 we moved to London where I studied at the Sir John Cass School of Art for a year, then to Liverpool to take my Diploma in Art and Design course, another four years. Cass was the paradise I needed as a start in purely classical studies. Liverpool College of Art had a more modern approach of 'soul searching' as one of my teachers put it, which helped me to bring out my truth. I chose weaving for my supplementary subject with enthusiasm.

During my studies, I got married and had a daughter Veronica in 1967. Motherhood opened channels and triggered feelings that made my art very personal, as in my BABY paintings (no.6-8), delving in and dealing also with memories of my own childhoods' and nostalgia for my homeland. I adopted my husband's surname, Bailey as it was short and easy and I became known by that ever since.

I received my Diploma in 1969, with Honours, and returned with my family to Cyprus in 1970 to get a job as an Art teacher -my parents had already moved back in '67. My art was reflecting my impressions and personal feelings a SYMBOLIC manner, I had my first solo exhibition in 1971 at the Nicosia Hilton gallery. Forty more were to follow through  the years in Cyprus, UK, USA, Greece, Spain, Ireland and my moral was to be boosted by several international awards the first one being in the Alexandria Biennale in 1973 with my oil painting 'Man' (no.19). In 1977, I was choosen to represent Cyprus with an exhibition of my work at the Rathbone Gallery, Albany NY, where I was to deliver a lecture and to attend a reception in my honour. My views and feeling at the time transpire in that first lecture. By then my paintings had started to be expressions of my personal philosophy and visions.

In 1980 my husband and I went our own ways. A time of freedom, in spite of the economic tightness - a house loan and a teenage daughter- the quality of life improved. With my daughter or alone, I drove all over Cyprus in time to enjoy its beauty before it was taken over by 'development', During this period the CIRCLES were born to eliminate the traditional corners, expand and flow. The first one was 'Life Cycle' (no.48) which includes the symbols I had created during previous years. By age 40 i was exhausted from teaching and got early retirement. I healed myself by listening to classical music and taking walks in nature, and devoted my time entirely to my painting: paradise once again! I had so missed collage days of painting all day. Many times in the past, I had waited for my husband and daughter to go to sleep so that I could get up and paint during the night. Always stealing time to do what I was meant to do. Now I had the chance to stay at home for days, silent, painting all day!

Then a lot of travelling started, with invitations to Art Festivals and Congresses as far as Canada and Hawaii, Venice and Ireland as wall as spiritual trips to Scotland, and Peru in 2000, merging with old energies left behind in order to move forward, free the future. Another paradise was the annual ABI/IBC congress, an uplifting week in which I met some of the finest people on the planed who knew who I was and what I was talking about and where able to develop it further. In Honolulu, Hawaii 2005 I gave my first presentation on my work with some more to follow through the years.

Drawing continued in parallel with painting, an experience empowering the tonal richness of colour in the pantings, eventually creating a retrospective Black/White exhibition in 2003 (no.103-104).

PAINTINGS I used fabric and wool for large, hand WOVEN works (no.87), which began in the '90s, and related to my supplementary subject at college which had culminated then in a loom woven, striped, grey coat which I used to wear at openings and other special occasions (page 186, photo lower right). My love for weaving became APPLIQUE (no.151-158) in later years using up old fabrics and wool that gathers in my house over the years, in a way summing up my life.

I had been aware that my art would eventually become abstract but I had to wait for it to pass through the stages. When I was young I thrived on exploring the secrets of form. As I grew older I began to search for the essence beyond form, SPIRITUAL life. In May 1999 I organized an exhibition of large SILK paintings (no.88-93) to celebrate the beginning of the 21st century. They measured 300*150 cm and hung from the ceiling resembling a forest with light coming through. That technique I had been developing since 1996, as I needed to give the paintings motion and transparency. I also "became my art" by painting on fabrics and making clothes in order to dress in my colours. I even painted doors and cupboards in my house in order to live inside the colours of my world.

Although until then I had needed to work in isolation, in 2007 I started having my act of painting recorded in photographs or video beginning with the triptych "Between Winds" (no.126), In the same year, I exhibited 7 triptychs painted between 1981-2007. In 2008 I gave my first PAINTING CONCERT at the University of Nicosia, 'unveiling the ritual of birthing a work of art' (see YouTube) an explosion of confidence where I painted a TRIPTYCH (3 panels 200*150 cm each (no.129-131), large enough for me to feel that I am inside the work, surrounded by MY WORLD..."if it doesn't exist, I shall create it" I said once. Recently I started to offer my art: I have painted murals for schools, given art workshops, donated on of the 'enniaptycha' to the Cyprus University wishing to inspire young people of next generations through the presence of light and colour in their everyday lives.

I invite you to experience the visual expression of my journey. It is up to you to open your heart and mind to perceive my TRUTH. I hope you enjoy the ride. Here I close one cycle, anticipating the next.